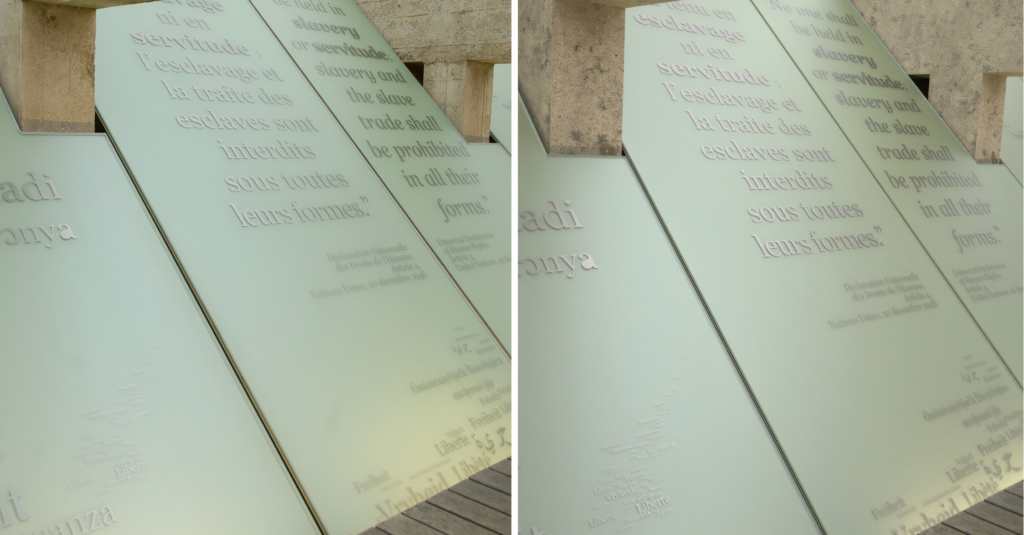 The memorial for abolition of slavery

Located along the Loire riverfront in the center of the city of Nantes, this memorial, designed by Wodiczko + Bonder, is a metaphorical and emotional evocation of the struggle for the abolition of slavery. This exceptional project, embedded into an old wharf, pays homage to all those who have fought and are still fighting against slavery in all its forms throughout the world. All along the green esplanade are 2000 commemorative plaques noting ships leaving Nantes on slave trade expeditions and the main African and American trading posts, revealing the enormity of the abhorrent slave-trafficking. Under the quayside, a 90 meter-long underground passage evokes the captives in the ships’ holds, inciting us to think about fighting for the abolition of slavery and the modern form it takes today. Throughout this thought-provoking walk reached by a decorative staircase, a series of quotations, in every language, from times past and present and from all over; they depict humanity’s long combat against slavery.

An interesting challenge for optical simulation

The commemorative plaques are made of high-tech glazings, featuring three sheets of glass laminated together, and including coatings, serigraphy, acid etch and paints. This gives them a unique set of visual properties, such as text appearing sometimes dark on bright, sometimes bright on dark, depending on light conditions. The crisp letters are surrounded by a soft shadow, and are faded away when viewed under high angle.
This structure is especially difficult to simulate, as most effects are caused by the multiple light bounces between the coatings, paints and acid etch layer. Therefore, this was a very interesting test subject for Ocean™.

The project CAD and technical specifications were kindly provided by Philippe Bompas from RFR, Paris, glass consultant on the project. The scene was imported and edited with Rhinoceros 3D

The glazings are a laminate of three glass panes, with coatings, serigraphy, paints and acid etch on the various interfaces

The reference picture of the project was taken at around noon on November, 29th. In order to closely match the lighting conditions, an HDR spherical picture of the environment was taken at the same time from the wharf.
The three sheets were modelled with their real thickness, and the PVB laminate foils absorptions were added to the glass as an effective medium (PVB refractive index is closely matching the glass).
The interfaces were modeled as described in the project documents:

Side by side comparison

The image below compares real pictures on the left with the simulation on the right (click to enlarge). The picture was taken with a SLR camera in raw mode. Its color profile was calibrated on-site with a color chart. Both were applied a 5900K white point and a linear response curve.

Figure 3 – Comparison between picture(left) and simulation(right). The wood box enclosing the light at the lower right corner was copied from the real picture for aesthetical purposes.

Figure 4 – Comparison between picture(left) and simulation(right), in the same conditions, but from another view point

Some small differences may be observed:

Figure 5 – Comparison between picture(left) and simulation(right), in the same conditions, but from another view point

This picture also shows some differences:

Besides these observations, this proejct shows the potential of Ocean™ for designing complex glass structures. As physical prototypes are very expensive, they can be replaced by virtual prototypes simulated at early stages of development, for faster and cheaper decision-making.